By the Hair of their Chinny Chin Chins 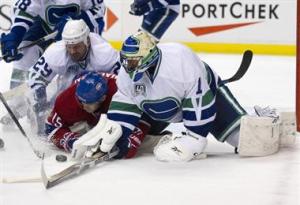 “Show class, have pride, and display character.  If you do, winning takes care of itself”“ -Paul Bryant

The Montreal Canandiens returned to the win column for the first time in 2 weeks, shoring up the Vancouver Canucks, 3-2 at Rogers Place Tuesday.  The toast of the town and B.C. native, Carey Price, finally exacted some revenge on his childhood team, defeating the Canucks on home ice following last years disastrous 7-1 thrashing at the hands of Luongo and Co.

The Price man was definitely the busiest of all buzzing bees during the contest, making 37 saves and securing a much needed Montreal Canadiens victory, their first since February 12th vs Toronto.  The Habs return home to Montreal following a 3-game ‘Rocky’ western road trip which finally saw the Canadiens escape with one victory and just 2-points to declare.

Last night’s game surely had its share of storylines.  For instance:

1) Jacques Martin finally decided to show-off his card-dealing skills and shuffled the lines for last night’s match (in a bid to insulate the Sedins, but we won’t give him tooooo much credit, right?).

Martin combined Plekanec, Cammalleri and Halpern together and reunited the Gomez, Gionta, Pacioretty line.  The moved proved effective, for the first 10-minutes when the Habs capitalized on a stunned Canucks squad and popped in 2 goals in 69-seconds (Desharnais (6) breakaway, Gionta’s (22) rebound).

2) Relegating Kostitsyn to the 4th line; uniting his him with Lars Eller proved beneficial for the Canadiens as AK FINALLY got his name on the stat sheet after a million games.  AK showed some hustle versus the ‘Nucks.  He skated well, he played the body and hey, he even got a goal, his 14th of the season and game-winner.  If the old saying is true and you’re only as good as your last game, well then, the Habs should rethink their trade deadline strategy and possible find a new home for the Belarusian.

3) Roman Hamrlik leading the team in power-play minutes (4:30 to be exact) while PK Subban saw limited offensive special team minutes (1:47) and an increased role on the penalty-kill (6:53, tied with Hal Gill).  First thing that comes to my mind; the Habs are showcasing Roman Hamrlik, but to whom?  The Canucks?  Let’s be frank, Hamrlik played a ‘good’ game, he finished plus-1  and played just under 22 minutes.  An offensive defenceman he is not, so it was quite perplexing to see Hamr getting 1st line PP duty alongside Wisniewski while Subban and Weber occupied the second pairing.  If the Habs are showcasing Hamrlik, what can the Montreal expect in return?

4) It was nice to watch the Canadiens play a hockey game for once, albeit for only 10 minutes in the 1st period.  The rest of the way was all Vancouver as the wrestled control away from the Habs and dictated the pace onward.  The change in pace forced the Canadiens to revert back to JM’s system, by habit, not by choice.  The bulk of the credit goes to Carey Price, once again proving to be Montreal’s MVP this year, did you expect anything less?

Their bags are packed, they’re ready to go.  The Habs will say Au Revoir to western Canada and return home to face the Toronto Maple Leafs on Thursday at the Call Centre, er, Bell Centre.  Yeah, yeah, Original 6 match-up, history, blah, blah, blah. Read my last article from 2 weeks ago on the history of the Habs/ Maple Leafs match-ups and see how I feel about this overrated battle: “Rivalry Shmivalry:  Habs vs Leafs (again.)”

Saturday it’s the Carolina  Hurricanes sweeping their way through Montreal.  Hopefully the Habs can pull off a Helen Hunt (Yummy!) and attempt to contain these ‘Canes before they start making a dent in the Conference, like in that movie. Typhoon was it?  Whatever?!?!

5 days until trade deadline, check me…