What the Hecht? Habs get Buffaloed 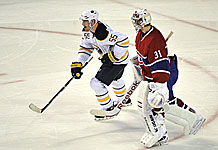 One would expect to celebrate a Habs victory going up 2 goals after playing 1 and 4/5th periods against a rookie goaltender in the biggest hockey market in the world, right?  Wrong.  Buffalo goaltender Jhonas Enroth, filling in for Ryan Miller after starting 31 straight games, helped bail out his team last night at the Phone Booth.  Enroth made 32 saves out of 34 shots while stopping 8-out-of-10 in the shootout and Buffalo forward Jochen Hecht scored the winner to secure a 3-2 F/SO victory for the Sabres.

Whether it was Enroth’s heroics, or the Habs and Jacques Martin’s inability to execute an ‘American History X’ curb- stomp to the face of their opponents, the Canadiens are once again scrounging for leftovers.

After surrendering 18 shots and only one goal in the 1st period, Lindy Ruff’s Sabres came back to life in the latter stages of the 2nd.  Goals by the ‘Human Torch’, Drew Stafford (24th of the season) and Jason Pominville helped rally Buffalo from behind.  After stifling Montreal’s futile power play in overtime, the Sabres forced 10 rounds in the shootout after going down 2 goals and made off with 2 points from the cookie jar.

Good news, the Habs came away with one point (I know, you feel like punching your computer screen right now, I feel like punching myself for attempting to look at the positives), the Kardiac Kids: Max Pacioretty (1 goal) PK Subban (+1, 29:22 ice time) and David Desharnais (1 assist, +1) are taking starring roles on the bleu, blanc, et rouge and, most importantly, guys like Cammalleri, Gill and Spacek will be back soon from their respective bumps and bruises.

Here comes the Bad News:  So the Habs had a shot to leapfrog over the Bruins and claim top-spot in the Northeast.  So they had the lead.  So the Canadiens squandered it.  Same TV show folks, I’ve seen this episode before.

Everyone’s favourite de facto 2nd line centre, Scott Gomez, is making a strong case for THE worst $8-million-dollar-plus-salaried professional athlete in the history of the Universe.  Gomez finished last night’s game –1 with 3 shots on goal and 50% in the face-off circle.  Need I say more?  His partner in crime, Robin, er, I mean, Andrei Kostitsyn finished the game –1 with one shot.  Please get Immigration Canada on the phone!  #deportgomez  #deportkostitsyn

Habs are tied with Boston with 69-points, the Bruins have the edge since they have 1-game in hand over the Habs.  The Sabres are breathing down the neck of the Hurricanes.  Last night’s win puts them 2-points behind Carolina for the last playoff spot.

Get your Cowboy Hats ready; the Habs are heading west!  First stop, Rexall place to face the NHL’s team of the 80’s, the Edmonton Oilers (17-32-8).  Yes, the Oilers are statistically the worst team in the league, but that hasn’t stopped the Habs from giving up leads to weaker opponents.  Just saying.

Then it’s off to Calgary for the Heritage Classic, followed by a stop in Vancouver next Tuesday.