The Montreal Canadiens are looking to wrap up the greatest Spring Break ever with a bonfire win over the Southeast-division leading TB Lightning ce soir.  As per usual, Saturday night’s start time is at 7:00 PM EST (8:30 PM CT).  Fresh off his seventh shutout of the season, Carey Price, will undoubtedly get the start in goal for le bleu, blanc et rouge.

Spring Break Memories for the family… 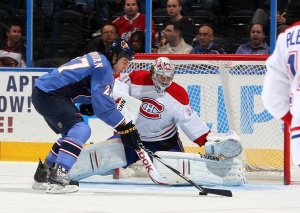 It’s Carey writing to you from sunny Florida.  I’m having fun; today I’m going to play the Lightning.  I don’t like them very much; the last time I played TB was back on December 30th, 2010.  We not only lost the game 4-1, but it was made official that we lost one of my BFF’s, Josh Gorges, for the remainder of the season with a  messed up MCL in his knee.

Oh well, I think I’m having more fun on this trip than my Christmas trip.  Mommy look, in my last two games, I’ve only allowed one goal, on 71 shots with a .988 SV% against Atlanta and Florida.  You can see my stats on my FB wall!

Got to run, PK’s trying to ‘antique’ me.

Well wasn’t that sweet?  Back to the stats, Carey Price is winless versus the Lightning this year and in all truthfulness, hasn’t faired entirely well against Vinny and Co throughout his short career.  Price has a less-than-stellar 3-4-2 record against the Bolts lifetime.  Alas, there is a silver lining, Price has been off-the-charts amazing this year on Saturday’s, boasting a 11-2-1 record with a 1.56 GAA and 4 shutouts this season.  Yup, the kid was born to play for Montreal.  Saturday night’s all right indeed…

Brother Andrei and Helter Sk-Eller will look to be the X-Factors on offence once again.  AK is looking to make it six straight games that he registers at least one point and Lars Eller will be looking for him.  These two wild and crazy guys are starting to carve their own niche on this team.  A few weeks prior to this road trip it looked as if ‘George’ and ‘Yortuk’ would be bussed out-of town; one going to Hamilton, the other going to Parts Unknown.  Now that these guys are working like a tandem, there is nothing they can’t achieve together…

Jacques Martin, the bane of my existence, was quoted yesterday saying his team must approach this game as a playoff game.  Dummy, I wrote that yesterday.  If the playoffs would start today, the Habs would be playing… wait for it…wait for it, The Tamp Bay freaking Lightning!  Hello?!?!?!  Of course the Habs need to approach this game like a playoff game, THE PLAYOFFS ARE ONE MONTH AWAY!  And the last time I checked, the bottom-feeders (Buffalo, Toronto, Atlanta and even freaking New Jersey) can still make it. 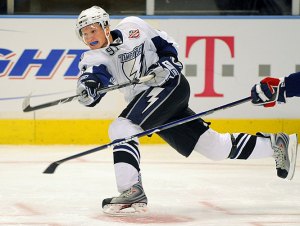 Tampa Bay needs this win, bad.  The Bolts have dropped their last two games and are currently 3rd place in the Eastern standings after surrendering 2nd place to the Boston Bruins two days earlier.  A convincing win at home over a hot team like Montreal will definitely send a message throughout the ranks.  The NHL’s leading scorer (41 goals) and 2nd in total points (78 pts), Steven Stamkos will be looking to surpass Vancouver Canuck’s forward, Daniel Sedin, in the race for the Art Ross Trophy.

Tampa Bay will go with ‘Rollie the Goalie’, Dwayne Roloson, as its starting netminder tonight.  In 20 games with the Lightning this year, Roloson has a 12-7-2 record with 4 shutouts and a 2.63 GAA.  In 11 career games against the Canadiens, Rollie is 4-4-2 with 1 tie.

Spring Break concludes this evening for the Habs.  Montreal will return home and prepare for Tuesday’s tilt against…the Boston Bruins.

By the Hair of their Chinny Chin Chins

“Show class, have pride, and display character.  If you do, winning takes care of itself”“ -Paul Bryant

The Montreal Canandiens returned to the win column for the first time in 2 weeks, shoring up the Vancouver Canucks, 3-2 at Rogers Place Tuesday.  The toast of the town and B.C. native, Carey Price, finally exacted some revenge on his childhood team, defeating the Canucks on home ice following last years disastrous 7-1 thrashing at the hands of Luongo and Co.

The Price man was definitely the busiest of all buzzing bees during the contest, making 37 saves and securing a much needed Montreal Canadiens victory, their first since February 12th vs Toronto.  The Habs return home to Montreal following a 3-game ‘Rocky’ western road trip which finally saw the Canadiens escape with one victory and just 2-points to declare.

Last night’s game surely had its share of storylines.  For instance:

1) Jacques Martin finally decided to show-off his card-dealing skills and shuffled the lines for last night’s match (in a bid to insulate the Sedins, but we won’t give him tooooo much credit, right?).

Martin combined Plekanec, Cammalleri and Halpern together and reunited the Gomez, Gionta, Pacioretty line.  The moved proved effective, for the first 10-minutes when the Habs capitalized on a stunned Canucks squad and popped in 2 goals in 69-seconds (Desharnais (6) breakaway, Gionta’s (22) rebound).

2) Relegating Kostitsyn to the 4th line; uniting his him with Lars Eller proved beneficial for the Canadiens as AK FINALLY got his name on the stat sheet after a million games.  AK showed some hustle versus the ‘Nucks.  He skated well, he played the body and hey, he even got a goal, his 14th of the season and game-winner.  If the old saying is true and you’re only as good as your last game, well then, the Habs should rethink their trade deadline strategy and possible find a new home for the Belarusian.

3) Roman Hamrlik leading the team in power-play minutes (4:30 to be exact) while PK Subban saw limited offensive special team minutes (1:47) and an increased role on the penalty-kill (6:53, tied with Hal Gill).  First thing that comes to my mind; the Habs are showcasing Roman Hamrlik, but to whom?  The Canucks?  Let’s be frank, Hamrlik played a ‘good’ game, he finished plus-1  and played just under 22 minutes.  An offensive defenceman he is not, so it was quite perplexing to see Hamr getting 1st line PP duty alongside Wisniewski while Subban and Weber occupied the second pairing.  If the Habs are showcasing Hamrlik, what can the Montreal expect in return?

4) It was nice to watch the Canadiens play a hockey game for once, albeit for only 10 minutes in the 1st period.  The rest of the way was all Vancouver as the wrestled control away from the Habs and dictated the pace onward.  The change in pace forced the Canadiens to revert back to JM’s system, by habit, not by choice.  The bulk of the credit goes to Carey Price, once again proving to be Montreal’s MVP this year, did you expect anything less?

Their bags are packed, they’re ready to go.  The Habs will say Au Revoir to western Canada and return home to face the Toronto Maple Leafs on Thursday at the Call Centre, er, Bell Centre.  Yeah, yeah, Original 6 match-up, history, blah, blah, blah. Read my last article from 2 weeks ago on the history of the Habs/ Maple Leafs match-ups and see how I feel about this overrated battle: “Rivalry Shmivalry:  Habs vs Leafs (again.)”

Saturday it’s the Carolina  Hurricanes sweeping their way through Montreal.  Hopefully the Habs can pull off a Helen Hunt (Yummy!) and attempt to contain these ‘Canes before they start making a dent in the Conference, like in that movie. Typhoon was it?  Whatever?!?!

5 days until trade deadline, check me…