Slippery Tuesday: Habs vs Sabres Preview and Other Stuff

The Sabres from Buffalo have roamed over to the Bell Centre, where the Montreal Canadiens will host yet another Northeast divisional rival tonight (4:30 PM/PST).

Coming off their 3-0 blanking of the Toronto Maple Leafs, the Habs are looking to make it two in a row while simultaneously attempting to obliterate any playoff hopes for the Sabres.

Buffalo sits 10th place in the Conference, 4 points back from a playoff spot.  Eighth place is currently occupied by the Carolina Hurricanes.  Good news for the Habs: the Phoenix Coyotes did the Canadiens a HUGE solid by defeating Ovie #8 and the rest of his Capitals comrades, 3-2 in regulation (phew).  The Phoenix win makes NHL profit-sharing all the more palpable. The Capitals loss officially slides Montreal into 5th place in the East.  A Montreal win tonight coupled with a Boston loss in regulation to the new-look Toronto Maple Leafs (Kris Versteeg traded to Philadelphia, and the Leafs acquire Voros) will leapfrog the Canadiens into the Northeast division lead and 3rd place overall in the East.

Reigning Vezina Trophy winner, Olympic silver medallist, and greasy hair aficionado Ryan Miller has been given the night off.  We here at johnnybertolo.wordpress.com are a little perplexed (and possibly a little turned on) as to why “Miller-Time” won’t be between the pipes ce soir.  Answer:  Miller made 31 straight starts since November, and if Sunday’s 7-6 Overtime loss wasn’t an indication that Drew Miller’s older brother needs a break, I don’t know what is. (Read Mike Harrington’s piece on Miller and the Sabres on BuffaloNews.com)

22-year old Jhonas Enroth will get his first career start versus Montreal tonight.  The greasy-faced Swede has a respectable 2-2-1 record with a 2.89 GAA this season.

Because Miller won’t get the call, johnnybertolo.wordpress.com has provided you with a highlight reel of the Sabres “other” MVP.  Here are the Top-10 Rick Jeanneret play-by-play calls:

The heir apparent to the Quebecois-Montreal Candiens-Francophone crown, David Desharnais, AKA Thomas, The Little Engine that Could from ‘Shining Time Station’, is indeed the spark the Habs have been looking for.  In his last three, the native of Laurier-Station, Quebec has 2 goals and 3 tallies.  With the way he’s playing, the Habs will have no choice but to involve Scott Gomez in some kind of underage “Bunga!  Bunga!” sex scandal party à la Silvio Berlusconi, or tag his name to a Construction price-fixing kerfuffle, whichever is cheaper. (WELL, YOU CAN’T TRADE THE GUY!!!)

Big, Bald, Alex Auld is a lock to back up Carey Price tonight.

Update: The Canadiens have called up D-Man Brendon Nash from the Hamilton Bulldogs.  The soon-to-be 24 year-old product out of Cornell University has 3 Goals and 23-points with a +12.  Not too shabby.  The Kamloops, BC native stands 6’3 inches tall and reminds me of another professional athlete with the last name Nash (and I’m not talking about Steve, or Rick). 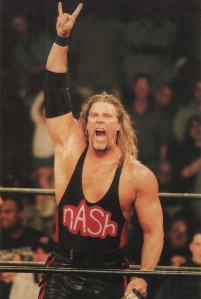 Put Your Hands Up for Detroit: I Love this City

I guess everyone’s back on the proverbial bandwagon.  The Habs, winners on Saturday versus the lowly Maple Leafs, ending their 3-game losing skid by blanking Toronto 3-0.  The Bruins, losers in back-to-back games (6-1, 4-2) against their Original 6 rival Detroit Red Wings made everyone in Montreal laugh like Eddie Murphy in Beverly Hills Cop.

Thankfully, the Montreal Canadiens wagon has reinforced shocks.  Following Wednesday night’s blood bath against the Bruins and Thursday night’s snooze fest versus the Islanders, the Habs needed a strong showing Saturday night against The Maple Leafs in front of the hometown faithful, or plunge into the St. Lawrence River, cradle and all.

Just like that, the Montreal Canadiens whipped the Maple Leafs like a giggling Homer J. Simpson chasing down a half-naked Uter in the locker-room during that ‘Simpsons’ Hockey episode.

The Canadiens and their fans are breathing a sigh of relief Monday morning.  Worried solely about digging their cars from an icy, snow covered tomb (Current ‘Hot Topic’ on Twitter:  #blamesubban).  Alas, still keeping warm upon viewing the current Eastern Conference standings.  As of today, Valentine’s Day (the holiest of all days) 2011, the Canadiens sit tied in 5th place with the Washington Capitals (Caps have 1-game in hand) and 1-point back of the Northeast division-leading Bruins.

After defeating the Habs back on December 10th, 2010, you couldn’t help but feel like the Red Wings owed the Canadiens, right?  I mean, the Habs DID give Detroit a run for their money 2 months ago.  The Red Wings HAVE been the most successful franchise over the last twenty years.  Furthermore, the Red Wings WERE responsible for chasing Patrick Roy out of Montreal…even though that was over a decade and a half ago. 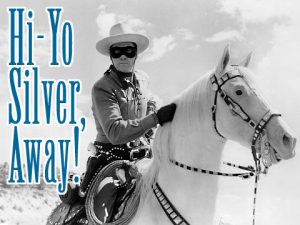 The point is, with so much bad luck befalling the Habs this year (injuries, horror stories involving team cohesion, PK Subban being to ‘cocky’ according to outside media officials, we call him ‘talented’ here), they needed a break from having their head in the noose.  And, with the Red Wings playing the part of the Lone Ranger over the weekend, the Habs may have assured themselves some extra playing time come mid-April.

It’s back to business for Le bleu, blanc et rouge.  Valentine’s Day, pffffffffff, who cares when you’re hosting another divisional rival at the Centre Bell the following day, right?  The Buffalo Sabres, coming off a Green Bay Packers/ Chicago Bears-like loss (7-6 F/OT) against the suddenly scorching New York Islanders team, will be looking to get back into the win column Tuesday.

The Sabres sit 10th place in the Conference, 4-points back of 8th place Carolina.  This game will mark the 5th time these two teams lock horns this season with the Habs holding a 3-1 series lead.  Buffalo won the last meeting, 2-1 F/OT in January.

Hopefully the Habs will give an update on the status of Max Pacioretty.  The New Haven, Connecticut native was drilled hard into the boards by Maple Leafs defenceman, Luke Schenn during Saturday’s game.  The injury has not been confirmed, but it looks like a left arm/hand injury, more details to follow.

Mathieu Darche is currently skating on the ice in Brossard.  Taking some shots on Habs backup, Alex Auld.  It has been confirmed that Darche, along with Mike Cammalleri, and MaxPac will participate in Monday’s practice.  Hal Gill is skating alone which signifies he may miss some extended time.

So it’s Valentine’s Day, if you’re sans partner, I can’t help you.  I’m pretty sure there’s a watering hole right around the corner where some person will give you all the attention you desire, at a nominal fee.

Guys, don’t get suckered in to all the hoopla, just show your woman you give a damn, cook her dinner, light some stupid candles, embrace her and make her feel special.

Girls, don’t put too much stock into this day, it’s Monday, it’s sh%#&y outside, the Habs aren’t playing and chances are, your man had to take public transportation to get to work today.  Give him a break, know that he cares and just curl up together and tag-team that bottle of vino!

Well, that was “entertaining”, right?  Is that the right word?  Combined 14 goals, 182 penalty minutes, a goalie fight (sort of).  If you’re a Boston Bruins fan then of course it was, you dummy!  Resurrecting The Beantown Brawlers, giving Mike Milbury that “funny feeling” from his cozy NESN booth (yes, I watched the 1st period on NESN, you want to talk about biased?), and most importantly, distancing themselves further from the Habs in the standings by winning one of those special “4-point” games.

For the bleu, blanc, et rouge, last night’s game was an eye-opener.  Despite their resiliency, they’re unrelenting never-say-die attitude was admirable to watch, but simply not enough to surpass the B’s.  With the win, Boston holds firm to 3rd place in the Eastern Conference, leaving the Habs still searching for answers.

It wouldn’t be much of a rivalry if the Bruins didn’t win every once in awhile; Boston showed some serious intestinal and testicular fortitude in this game.  Walloping the Habs with every chance they got, earning every goal, hitting every body, punching every face. 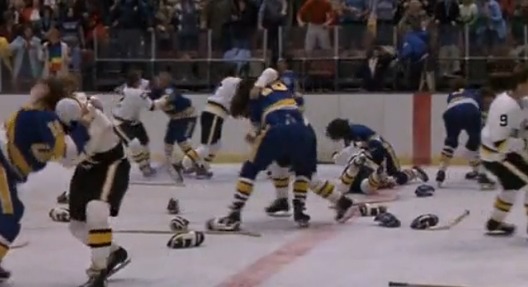 Was it pretty?  Of course it wasn’t.  It was downright nasty.  At some points it looked less like a hockey game and more like an audition for Slapshot: The Broadway Musical.   For some of our older fans watching Wednesday’s game, it certainly conjured up memories of O’Reilly, Jonathan, and Wensink going “Tasmanian Devil” on the NHL during the 70’s.

In my previous post, I had mentioned that the Canadiens would win Wednesday night’s tilt vs. the Bruins simply on the lack-of-success displayed by the Boston Bruins goaltenders against Montreal since, well, the beginning of time.  Tim Thomas surrendering 6 goals (in 2 periods none the less) doesn’t surprise me.  What does surprise me is Jacques Martin’s continued trust in Scott Gomez as a 20-22 minute a game centre.  The trio of Eller-Gomez-Kostitsyn combined for –12 and only 5 shots.  Gomez was blanked in the face-off circle and the Big Bad Bruins, with their towering size, completely dismantled the Habs’ defacto second line.

What to do now?

Wednesday night’s game proved once again that the Canadiens need a skilled, physical presence down the stretch.  Ottawa Senators forward, Chris Neil comes to mind, seems unlikely he will be traded to a divisional rival.  The Islanders Trent Hunter is another.  Habs fans are screaming from atop the highest watchtower, “Where’s the Beef?”.  Montreal Canadiens General Manager Pierre Gauthier will have to appease the fans soon, before this game becomes the focal point of the Habs’ unravelling in the 2011 season.

The Canadiens will return home to face the New York Islanders at the Bell Centre ce soir.  The Islanders are working on goaltender #5 this season as they are going through netminders faster than Larry King goes through wives.

This is the 4th and final meeting between these two teams this year with the Habs holding a 2-1 series lead.  The Islanders were the victors during their last meeting on Boxing Day, 4-1 in Uniondale.

After surrendering 8 goals last night, it looks as if Big, Bald, Alex Auld will get the start for Les Canadiens in place of Carey Price.  The Habs have called up Ryan White from Hamilton, looks as if Tom Pyatt will be the odd man out after getting his face split-open by Gregory Campbell.