Well, you know what day it is:

(Warning: Strong Language and Drug Use)

Just when you thought the Habs were done like the proverbial Sunday dinner, they escaped last night’s game at the Bell Centre with the deuce in the bank account.  The Tampa Bay Lightning, still in 5th place in the Eastern Conference, salvaged the lone point following the Shootout loss.  Both teams have suffered injuries to some key players over the last while.  The Lightning, without Ryan Malone and Steve Downie, two key contributors the Lightning’s successes in the first frame of the 2010-11 are still on the mend

The Habs, obviously without Pacioretty, Plekanec and Halpern up front and sans Gill and Sopel who joined Markov, Gorges and Spacek in a bid to resurrect Motown Records and form the second coming of The Temptations 2.0.  They will tour various arenas across North America soon! 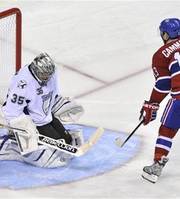 Jokes aside, the rashes of injuries sustained by both teams are clearly having an impact on both teams ascension in the standings.  The Captials seem to be doing just fine without Backstrom and Arnott up-front.  But the acquisition of both Dennis Wideman and Marco Sturm have shored up the woes on the back-end, thus providing some balance for the team.

Kudos to teams like the Capitals and the Bruins for acquiring depth pieces for the long haul.  As the season winds down to a close, you can clearly see who’s healthy and who’s limping like a dog in Michael Vick’s backyard.  The Habs are clearly that mutt, but they’re still kicking, ready to fight for another day.

Last night was no different, as it was expected that the old dogs (Gomez, Gionta, Moen and Mr. 1300, Roman Hamrlik) would pick up the slack for their fallen teammates.  Aside from the captain and Mr. 1300, it was the young pups, Lars Eller and David Desharnais, who played up to their coach’s standards.

Lars Eller was a stud all over the ice, the numbers might not show it, but as many Habs scribes have pointed out, Lars played just under 19 minutes to set a career high and went 5-for-10 in the face-off circle.

Following every game, after every save, Carey Price’s argument for the Hart Trophy for the NHL’s Most Valuable Player gets stronger and stronger.  Price, once again, had another stellar outing, stopping 35-of-37 shots and 3-out-of-4 shootout attempts to preserve the victory.  The cool, calm and collected Price improved his GAA (2.31) and SV% (.924) and ranks 1st in wins for a goaltender this year (34).

Price has been the shining light for the Canadiens all season long.  With lingering injuries and some inconsistent play by certain top-tier * cough * * cough * players (well, I shouldn’t say ‘inconsistent’ if you don’t score in 27, 28, 29 whatever games, well, you’re pretty consistent at being bad in my book) and stupid, selfish, irresponsible penalties by a former 4th overall selection, it’s no wonder Price is being heralded as the neighbourhood hero after saving the bacon.

The Habs travel to the Big Apple ce soir to take on the Rangers at Madison Square Garden.  The Rangers are holding on to the 7th spot in the East with 78 points.  With a win over the Habs tonight, the Rangers will be five points away from 6th.

The Habs, 3-0-0 this season against the Rangers will meet their original 6 rival for the last time this regular season.  The Rangers, coming off a 6-2 win over cross-town rival, New York Islanders on Tuesday are looking for their 3rd straight win.  Henrik Lundqvist looks like the clear-cut starter tonight.  It’s unknown whether Carey Price will get the nod; Price has started in the last eight consecutive games for the bleu, blanc et rouge.