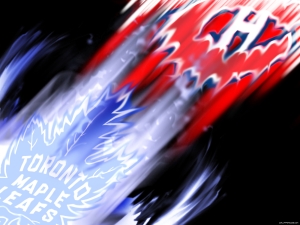 Here we go again, Canada’s most storied (and exaggerated) rivalry will add page number 706 to its increasingly irrelevant book.  The Montreal Canadiens, who are currently mired in a 3-game losing streak, will host Joffrey Lupul and the rest of the Toronto Maple Leafs @ the Bell Centre stasera. No doubt, both teams are looking to redeem themselves following extra frame losses on Thursday.

I don’t know when it happened, but I’ve grown progressively more, shall we say, “annoyed” with this particular cross-province rivalry.

The Montreal/Ottawa “rivalry” is laughable at best.

But seriously, the Canadiens/Maple Leafs rivalry has provided fans with little substance over the last 3 decades.  Other than the shared hatred that Montreal and Toronto fans have for each other, we can officially blow the whistle on this perennial meeting of the juggernauts.

The on-ice product between these two teams has lacked for the last while, whether it was the Canadiens of the 80’s or the current roster reigning terror on Toronto, or vice-versa with the Maple Leafs of the late 90’s, early 2000’s.  I am hopeful the rivalry will re-ignite itself once Toronto ices a competitive team (hopefully) in the next few years.

I’m reminded of a conversation I had with Team 990’s Mitch Melnick over a couple pints of “spirited beverages” at a reputable downtown watering hole some while ago.  Ok, I don’t remember the conversation verbatim, but we were discussing the relevance of rivalries in today’s modern game and how each stacked up.  During the discussion, I bring up the TOR/MTL rivalry – he completely shot down that notion.  Confused (or in a haze) I wondered why? The reason?  Simple.  What’s the one thing that makes a rivalry truly special?  Playoffs.

Some 32 years later and the closest these two institutions came to facing each other in the playoffs was back in 1993 when the Maple Leafs were one game shy of joining Montreal in an all-Canadian Stanley Cup Final.  The first all-Can final since Montreal/Calgary ’89.  On the 100th Anniversary of the Stanley Cup, just to twist the sword.

The one little thing keeping this cross-province rivalry alive is, in retrospect, not so little after all.  It’s you, the fans, who keep this rivalry alive.  It’s the age-old rivalry between Good and Evil, English and French, Kahn and Kirk, Cats and Dogs.

It’s the same story, right?  Toronto, with their Leaf Nation convoy roll into town, trade annoying barbs with the local Montreal populous on Crescent St. decked out in their retro circa 1998-2003 Domi, Sundin, Roberts and Joseph jerseys.  Blindly championing Brian Burke as he wheels-and-deals himself out of a jam.  Having the audacity to remotely suggest that the Maple Leafs will turn Phil Kessel into the next Wendal Clark, drinking that swill of an excuse they call for a beer “Molson Canadian”, mumbling and stumbling their way down into hockey’s Mecca, hoping to catch a whiff of success; like a coke-addict to an 8-ball, or a Dutch-oven to an unsuspecting girlfriend.

The Habs need to teach the dog, in other words, they must out-skate, out-manoeuvre, out-think and pretty much out-class their divisional opponent in every statistical category.  The Canadiens have been knocked around this past week and nothing puts you in a great mood like beating the crap out of a futile opponent.  Looks like Jean-Sebastien Giguere will get the start for the Leafs.  He may brag about his 7-2-1-career record against Montreal, but he’s 2-4 on the road this year.

No word on whether we’ll see Hal Gill or Mathieu Darche in the line-up.  Though, I’m pretty sure Ryan White’s good to go.  Crossing my fingers for a Grabovski/Kostitsyn battle royal, duel to the death.  Maybe that will jump-start Kostitsyn’s engine, just in time to drive out of Montreal into the sunset.

Greatest goalie in the world ever (and prompt taxpayer), Carey Price is a lock to start,